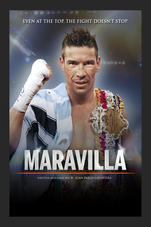 New York– “MARAVILLA”, the documentary, based on the struggle of Middleweight Champion Sergio Martinez to reclaim his crown in boxing, premiered on iTunes US on May 19, 2015. The film premiered at Tribeca Film Festival (2014), won Best Editing Award at Mar del Plata Film Festival (Argentina), was nominated for Best Documentary for the Academy Awards of Argentina (2014), and was selected for the Official Competition at Guadalajara (Mexico, 2014), Lima (Peru, 2014) and Málaga (Spain, 2015) Film Festivals. “MARAVILLA” will also be available on Google play, YouTube, PlayStation Networks, Vudu, Amazon Video, Xbox and on demand on major US cable providers on May 19, 2015.

“Maravilla” premiered on Netflix USA, Canada and UK on April 1st and it was rated 4 stars (out of 5) by more than 22,000 households in only 30 days. “Maravilla” was also #1 Most Popular Spanish-Language Documentary on IMDB.com for the last 2 weeks. The film is 50% in English and 50% in Spanish.

Director Juan Cadaveira gains unprecedented access into the world of boxing, revealing actual negotiations, the politics of championship organizations and TV networks, and the vulnerable physical condition of an aging champion. The 80-minute character-driven documentary offers a true inside look at the industry and follows Middleweight Champion Sergio Maravilla Martinez in every step of his battle inside and outside the ring to reclaim the title he rightfully owns.

Along with thrilling footage of Sergio’s mastery inside the ring and the persistent efforts by his team to keep him at the top, the film goes beyond the guts and glory of a common boxing tale. “MARAVILLA” reveals an unforgettable man who uses ambition, adaptability, relentless determination and integrity to navigate through a business that is attempting to control his fate.

The documentary captures the grueling physical and mental demands on Sergio. Viewers are invited into his dressing room, his physical therapy sessions, and into his inner circle. The road to his achievements is shown to be isolating at times and requires a vision far beyond what is considered possible for a man who didn’t picked up boxing gloves until he was over twenty.

“MARAVILLA” sheds light on Sergio’s childhood growing up in poverty in Buenos Aires, with personal stories from family members and archival footage and photos from his youth. Sergio reveals his inner self and his approaches to successfully overcoming disappointment, adversity and neglect.

First time director Cadaveira, shot the film over two years in four countries: Argentina, Spain, Mexico and the United States, and in many different cities, from Quilmes to Las Vegas, via New York, Atlantic City, Los Angeles, and Mexico DF.

Read More and Purchase on itunes.com