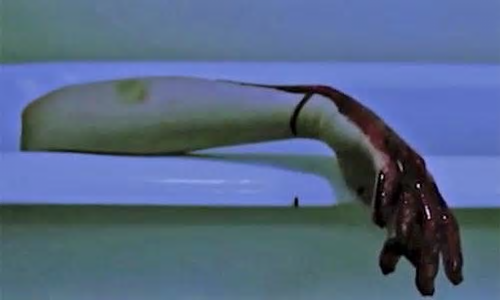 Robots are smart enough to write now, which means it's only a matter of time before I'll lose my job. But for now, I might soon be able to enjoy "Impossible Things," the first feature-length movie written with artificial intelligence.

A company called Greenlight Essentials made an artificially intelligent robot that analyzes audience response data and writes stories based on what it thinks people will like.

With some help by the humans who made the AI, it wrote "Impossible Things," a horror movie about a family who moves to the middle of nowhere and start hearing creepy things around the house. The trailer gives a pretty good idea of the tone.

Now that they have a screenplay and a trailer, Greenlight Essentials wants to make a full-blown movie.

The greater promise of the AI behind "Impossible Things" is that it'll save the movie industry.

Greenlight Essentials says the AI can look at screenplays and, based on the box office results of other movies, figure out if that screenplay will be profitable if its filmed as a movie.

According to the company, 87% of films in the box office fail to break even, a claim I couldn't corroborate anywhere. Jack Zhang, the founder and CEO of Greenlight Essentials, told INSIDER he got to it by comparing the production budget and box office revenue of films. However, studios tend to obscure the profits for individual films beyond just box office performance. They generate revenue by selling films to international distributors, by putting them on video-on-demand services like Netflix, by selling them on DVD, and with various merchandising opportunities.

Greenlight's 87% figure doesn't take any of that into account.

They're famously wary about spending tons of money on expensive products that don't have a proven track record. That's why they make so many sequels.

Furthermore, large-scale data-driven screenplays have been tried as well, and it famously torpedoed Relativity Film into bankruptcy. So there are reasons to be wary.

Zhang, to his credit, takes the destruction of Relativity very seriously. He wrote a post explaining the problems with how they ran their models and draws a distinction between them and Greenlight's artificial intelligence software: "All models are wrong, but some are useful, and that is the logic behind Greenlight Essentials’ software: to be useful. We do not make any assumptions to build models or simulate risks; rather, we only use real-world real data points to draw real conclusions."

Those conclusions mean taking fewer risks. The trailer for "Impossible Things" doesn't look like anything we haven't seen before. If the AI is able to write new screenplays based on data from successful movies, then the movies it writes will look like ones that already exist.

The real use for the AI will be for independent filmmakers.

Indie filmmakers don't have teams of data analysts at their disposal to figure out if a movie will make money, like big studios do. For a big studio, using this system just makes an already risk-averse company even more risk-averse.

For an independent project, having a computer program you can buy to help out changes the game. Plus, it'll actually help you write your movie instead of just telling you what works and what doesn't.

Check this out on BusinessInsider.com