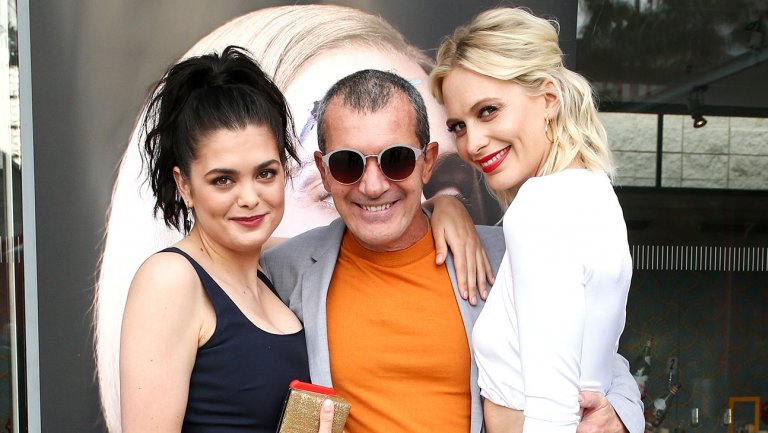 Photo courtesy of John Salangsang/National Geographic/PictureGroup
"They offered me this character in my 20s and in my 30s but I always said, 'No, I don't want to play him yet,'" says the actor of taking on the role of the painter in the Nat Geo anthology series.

It's only been about three weeks since Antonio Banderas finished shooting Genius, National Geographic's anthology series in which he stars as artist Pablo Picasso.

"My eyebrows are still growing back, and my hair too," said the actor, who shaved off both to play the iconic painter.

But on Sunday night, he was in Los Angeles along with much of the cast, crew and producers of the show for an intimate dinner celebrating the new season, which will premiere on April 24. At the event, held appropriately as the Los Angeles Country Museum of Art, castmembers Alex Rich, T.R. Knight, Poppy Delevingne and Samantha Colley were also on hand to speak about their work on the show.

Several new scenes from the show, which chronicles both Picasso's art and his tumultuous love life (and how the two tie together), were debuted at the event. For Banderas, taking on the role of one of his childhood heroes was a long time coming.

"They offered me this character in my 20s and in my 30s but I always said, 'No, I don't want to play him yet. I admire him too much. He was my idol since I was a little kid,'" said Banderas.

Banderas, raised in the Spanish city of Malaga (also Picasso’s hometown), said he was able to convince the show to actually shoot in Malaga.

“Malaga was not in the plans for the shooting. I said, 'you have to come to Malaga,' " he said. "The first 10 years of a person’s life are very important.”

Executive producer Ken Biller revealed that Banderas was "being a little bit humble about Malaga." He said on a trip to Banderas' hometown, he was picked up at the airport by a friend of Banderas' who said: "There are two heroes of Malaga. The first is Pablo Picasso and the second is Antonio Banderas. He's the second great artist from Malaga, so it was our honor and privilege to make the show with him."

Banderas would spend between two to five hours in the makeup chair each day, using prosthetics to become the painter. For Ron Howard, whose Imagine Entertainment produces the show along with Fox 21 and MadisonWellsMedia, he realized as soon as he met with Banderas that the actor was his one and only choice for the role.

"It's a deep understanding, an intellectual understanding and an emotional one," said Howard of Banderas' connection to the character. "One of the things that really resonated is he said, 'I've known 50 Picassos — not geniuses, not artists, but men from that era — and from the life that Picasso lived, I see Malaga."