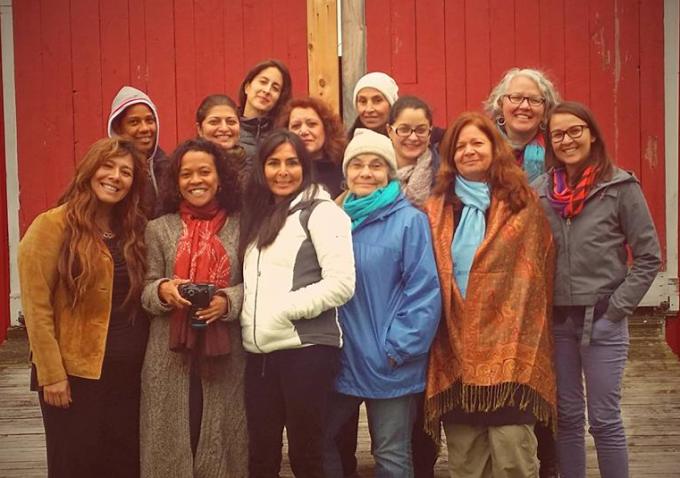 Spotting a woman director of color helming a studio film or showrunning for a network can be like finding a Puya Raimondi -- that rare flower that blooms every 100 years. There are plenty of incredible women directors and screenwriters of color, and a few, such as Shonda Rhimes and Mira Nair, have shown that their work can be successful in the mainstream, but the industry has yet to offer most diverse women directors opportunities commensurate with their talent and demographics.

“That’s why we started our Diverse Women’s Initiative ­-- and the Artist Retreat Center is a centerpiece for us,” explained Axel Caballero, Executive Director of NALIP, the National Association of Latino Independent Producers. “When our Trustee, Maria Agui Carter, floated the idea of creating this unique opportunity for diverse women screenwriters and directors, we knew we would be serving a vast, unmet need.”

The next residency program for the NALIP Artist Retreat Center (ARC) for women filmmakers of color will take place on October 1-11, 2015. Up to ten exceptional women will be invited to workshop their projects on a private 100-acre farm in northeastern Vermont during prime New England foliage-viewing season. 2014 ARC Fellow Yvonne Russo, a seasoned Native American producer and director now working on the new HBO series “Lewis and Clark” with Tom Hanks, Edward Norton and Brad Pitt, called her experience at last year’s retreat “an opportunity of a lifetime.”

NALIP has seen an exponential growth in membership and their media work, including by producers, directors and writers. Latinos are over-represented among TV viewers and purchase one in every four movie tickets, so it would seem natural that the industry would be making room for Latino media-makers with open arms.

But a study commissioned by NALIP found that, from 2010 to 2013, Latinos made up only 4.1% of TV directors, 1.2% of producers and 1.9% of writers. In movies, Latinos accounted for 2.3% of movie directors, just over 2% of producers, and 6% of writers. No Latinos currently serve as CEOs, presidents or owners of major English-language networks or studios. Divide those numbers by gender, and one begins to understand how difficult the road for a Latina woman director and screenwriter can be.

Statistics are inequitable for all women directors, but they are especially so for diverse women. Few programs focus on helping to fight the many layers of additional challenges -- psychological, social, political and economic -- that women of color face in getting their films made and distributed.

The residencies for diverse women at the NALIP ARC allow each artist uninterrupted time and space to work in an inspiring environment. Also on offer are career-sustainability and artistic-empowerment workshops, plus group and individual mentoring. Last year’s mentors included Cynthia Lopez, NYC Commissioner of Film and Entertainment, the first woman of color in this powerful role. “Cynthia's presentation moved me to tears. I realized, then, what the ARC could be. Cynthia acknowledged a very important theme -- the importance of community, of supporting each other, to raise the bar,” explains Latina ARC 2014 Fellow Nina Alvarez, winner of a news and documentary Emmy and Peabody.

“The ARC Residency enabled me to drill down to the film's creative core and make decisions about the project that will affect the course of production and my career. Priceless,” says Latina filmmaker and 2014 ARC Fellow Xan Aranda, who was recently nominated for an Emmy for her latest work alongside collaborator Jill Soloway for "This is Me," a five-part shorts docu-series.

The NALIP ARC creates an inspiring environment to concentrate on work and reflection during the day, with chef-prepared farm-to-table meals and evening presentations and discussion of each artist's work. The Fellows stay in country houses on a Vermont estate overlooking organic hay fields, forests, mountains and a private pond, all within walking distance to the largest waterfall in Vermont.

There is no cost for the residency, and a limited number of scholarships are available to offset travel and food costs. Applications are due August 17, 2015. Apply and get more information here.