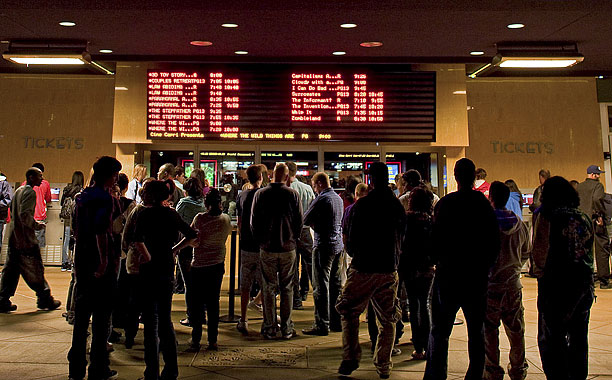 For kids in school, summer is typically spent catching up on reading lists and assigned homework between hours spent at the swimming pool and with friends at summer camp (not necessarily in that order). But many professionals working in the entertainment industry—whether as producers, journalists, actors, or producers—spent this summer learning about Latino moviegoers. (That’s largely thanks to an exclusive series on Hispanic film consumers published at TheWrap.)

From the growing importance of Hispanic females at the box office to the expanding movie preferences of Latino film fans, here are a few essential—takeaways about Hispanics that got Hollywood’s attention this summer.

1. Hispanic women over age 25 are the most frequent moviegoers. Summer films like Transformers: Age of Extinction, Godzilla and Captain America: The Winter Soldier are meant to capitalize on the appetites of young, mostly male audiences, but it turns out that Latina movie lovers headed to the movies more this summer often than any other age or ethnic group. According to a study conducted for The Wrap by market research firm C4, about 20 percent of Hispanic women watched this summer’s major releases—and in every case except for The Fault in Our Stars, those buying movie tickets were over the age of 25.

2. Hispanic audiences go to movies of all genres. Horror and family flicks used to be considered standard money makers among Latino audiences (the smash success of Guillermo del Toro’s Mama and the Lego movie were largely driven by Hispanic audiences). This summer, hits like 22 Jump Street (a comedy), Fault in Our Stars (a drama) and Edge of Tomorrow (a thriller) were all heavily attended by Latinos, who made up at least 20 percent of the opening week audience—proving that just like in political elections, their preferences aren’t monolithic.

3. Twenty is a magic number. When it comes to Hispanic movie lovers, that is. According to Nielsen/Univision research conducted for The Wrap, Latino ticket buyers are now Hollywood’s most valuable audience, accounting for at least 20 percent of ticket sales opening weekend for the highest-grossing movies in May and June. “You don’t have a major hit without Hispanic moviegoers,” Chris Aronson, Fox’s president of domestic distribution, told TheWrap.

And consider this: Latinos purchased 25 percent of the tickets sold in 2013 in the U.S. though they account for just 17 percent of the U.S. population, according to a study published by the Motion Picture Association of America last year. Those statistics are the driving force for a growing number of creative agencies that specialize in helping studios market films to Hispanic moviegoers, who tailor media campaigns to appeal to an audience that cares deeply about culture, family-friendly content, and Spanish-language media.

4. Tacos and margaritas now mean big money for cinemas. It’s no secret that overpriced popcorn and Big Gulp-sized drinks earn major dollars for movie theaters, but a diversified menu at the concession stand is a big draw for Latino moviegoers. Fajitas, chicken wraps, tacos, dishes spiced with chipotle peppers, and specialty cocktails are now available at AMC’s 15 dine-in theaters nationwide, part of an industry-wide push for diverse dining choices and alcohol offerings that aims to capitalize on the fact that Hispanic moviegoers overindex in their purchase of concessions and alcohol.

“Our dine-in theaters, while not specifically targeting a certain demo, have a seasonal menu that would line up closer to a Hispanic moviegoing population in terms of food,” AMC spokesman Ryan Noonan explained to TheWrap.

5. The Latino presence in film—both in front of the camera and behind the scenes—remains alarmingly low. Despite the presence of Latinos in summer films like like Sex Tape (starring Cuban-American actress Cameron Diaz) and The Purge: Anarchy (with its predominantly Latino cast), there are “fewer Latino lead actors in the entertainment industry today, than there were seventy years ago,” a recent study by the Columbia University Center for the Study of Ethnicity and Race shows.

And it gets worse: When Latinos are on camera, they are typically portrayed in roles that lean heavily on stereotypes—Latinos are often cast as criminals, law enforcers, cheap labor, and hypersexualized beings, the study found. And according to the study, when it comes to behind-the-scenes talent, Hispanics account for just 2.3 percent of movie directors, about 2 percent of producers, and 6 percent of writers.

“The success of a few Latino stars has created a widespread perception that media diversity in the U.S. is significantly improving,” said Frances Negrón-Muntaner, director of Columbia’s Center for the Study of Ethnicity and Race and the study’s lead researcher in a statement. “But our findings indicate that, in some ways, it is getting worse.”

Check this out on Entertainment Weekly.