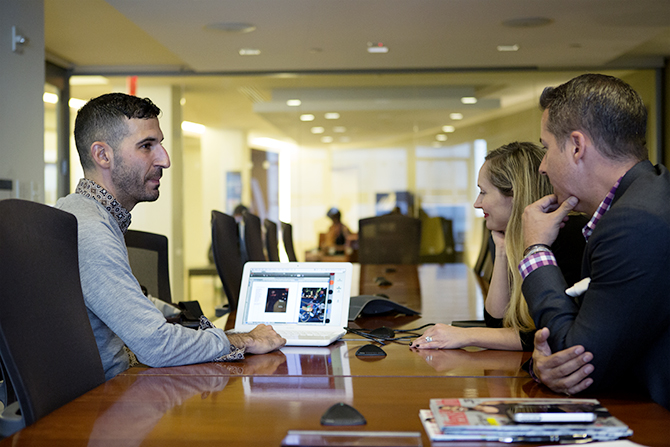 It happens more often than you might think—a writer with a promising project makes a mistake in the room and “breaks the deal.”

Although you may already avoid most of the mistakes I identify in this post, you may find one or two to be a wake-up call. So be honest with yourself. Is it possible that you sabotage yourself and break the deal in any of the following ways?

1. Sitting in the wrong seat

2. Not including everyone in the room

Especially in Hollywood, there are people in positions of power who are (or look) very young. If someone’s in the room with you, their opinion will be consulted.

3. Assuming they know who you are

The decision-maker may have forgotten why they ever made the appointment with you in the first place. Be ready to (re)introduce yourself at the beginning of the meeting.

4. Addressing the buyer too informally

Some people try to create instant friendships by calling the buyer by a first name or even a nickname. This is a risk not worth taking. Instead of forcing intimacy, err on the side of formality. Let the decision-maker suggest moving to a first-name basis.

5. Starting before the decision-maker is ready

Let the decision-maker finish phone calls, get papers arranged, and otherwise get themselves together before you start your presentation.

While it is understandable that you may feel nervous, for many decision-makers, obvious signs of anxiety are an immediate deal-breaker. After all, if you lack confidence, they can’t introduce you to their colleagues or their boss and say, “I vouch for this person.” So if you walk into the room with sweat beading on your brow, shake the decision-maker’s hand and your hand is wet and clammy with nervousness, and your throat is so dry that your voice cracks when you start to talk, you’re at a serious disadvantage.

A little flattery goes a long way. Any more than a little flattery, however, goes a very short way. If you are too complimentary, if you are too over-awed, if your nose gets too brown, you are showing weakness. To the decision-maker, it seems like you’re afraid that what you’re selling really isn’t good enough.

Getting defensive during the meeting is an amateur move. If you get asked a tough question and you groan or make excuses, the decision-maker will think you’re not the right person for the job. If you can’t handle yourself professionally in the initial meeting, how can the decision-maker expect you to handle even higher-pressure situations? Here’s what the pros do instead of arguing—they say something like: “Interesting point. Let me think about that.”

Don’t drum your fingers or check the time repeatedly. In the room, you’re on the decision-maker’s schedule. Don’t give the impression you’d rather be somewhere else.

10. Using jargon that is not known to the buyer

You want the decision-maker to understand every word you say. If you use a word, phrase or acronym with which they are not familiar, they may not want to ask you what it means. Now, you’re pitching someone who may be confused and feeling stupid. Not good.

How do you know if you’re phoning it in? If you haven’t customized your pitch, you are. Decision-makers can tell if your pitch is something you’ve presented the same way countless times before. Little tweaks make a big difference.

Some people naturally talk fast. However, it’s not smart to talk faster than the decision-maker can process the information. Plus, talking fast often means that you’re nervous—and you know how decision-makers feel about anxiety.

13. Starting with an apology

Don’t say anything like, “I’m not very good at pitching,” or “I’m pretty inexperienced,” or anything else that reflects negatively on you. Decision-makers only want to do business with professionals, not wanna-be’s.

14. Making a big deal about where you went to college

If you and the buyer went to the same school, that may be a rapport-building topic. Otherwise, you can mention the school you attended once, casually. Emphasizing your educational pedigree too frequently makes you look like a tool. Decision-makers care more about what you’ve done since you’ve left school.

If you haven’t established good rapport, the decision-maker is probably not listening to your pitch—he’s still gauging what he thinks of you.

Female executives should be looked in the eye, if you get my drift.

Just like when you’re on a date, overt signs of desperation are a turn-off, e.g.: I met with a writer who came in to pitch and handled himself well, I just wasn’t interested in his ideas. Unfortunately, he thought this was his big chance and he wouldn’t leave my office until he pitched me something I liked. Eventually I was holding my office door open, looking at my watch and tapping my foot, while this writer just kept pitching and pitching. “But wait, I’ve got a comedy about the Khmer Rouge from Pol Pot’s point of view….”

18. Giving too much information

Some people feel comfortable talking with people they’ve just met about medical conditions, financial situations or romantic escapades. I met with one writer who blurted out mid-pitch, “I haven’t had sex in twelve years.” Yikes! In general, if you wouldn’t want to see it on the front pages of the local paper, don’t share it in the room.

One time I heard a pitch from a guy who was sweating so profusely, when he stood up my couch had a writer-shaped sweat-stain. I felt bad for him, but if I have to re-upholster my couch after the meeting, that’s a “No.”

One of the most memorable pitches I ever heard was from a brother-sister writing team. They handled themselves well in the room for the first few minutes as we got to know each other, but when they started pitching their romantic comedy, I got more and more uncomfortable. At one point, they looked lovingly into each other’s eyes and leaned in for a tender, heartfelt, almost-kiss that signified the end of the first act. I ended the meeting before they pitched the climax of the story.

Of course, I’m not really worried that you are going to sweat through a couch or kiss your sister. I am concerned that you may be committing some of the more subtle deal-breakers without knowing it. After all, it’s not like buyers will be taking you aside after the meeting to give you criticism and feedback like, “Hey, just so you know, you talk too fast.” However, if you can avoid the deal-breakers I’ve described, your pitch will have a much better chance.